If you would decide to make a visit to Moscow in these wonderful summer days, it is most likely that the first place where I’d invite you will be Crimean Embankment – brand new pedestrian zone integrated with the park on the riverside in the downtown, just 20 mins away by foot from Kremlin and other most famous sightseeings.

Just one year ago the only thing you might see here was the dirty two-lines street with two narrow pedestrian paths on each side. One of them was located close to the tall fence separated the small soviet-style park, another one stretched along the river – nothing interesting at all. The new city government which is well-known here for their progressive views in relation to the urban design, made a decision to completely rebuilt that district and later, on September 2013 they’ve represented this brand new pedestrian zone, one of the most comfortable and nice areas I’ve ever been.

So-called “the dry fountain” is the center of this zone which is especially popular during hot days. Why “dry”? Because it doesn’t have traditional plate where water is stored. The water is draining in the holes inside the road, coming back to reservoir hidden underground. Water streams are splashing in the random way from unpredictable mins. Youngs just love to run through in any weather (no matter spring or summer or even fall) risking to become wet – the stream may appear from anywhere. But when it’s quite hot outside – 28 degrees Celsius or above – nobody cares about that risk. Everybody intentionally jumping inside the water and hunting the streams of the cool liquid. It helps to withstand during the heat and continue walking through the city.

Also, the dry fountain at Crimea Embankment is amazing place just to stay and watch other people, their happiness and emotions. You are filling out with a positive and good mood, forgetting all troubles and worries. Amazing place I would definetely recomend you to visit in summer Moscow.

Below are few other pictures made by me there recently.

1. Except of the fountain, there are several others interesting places to see at Crimea Embankment. This is an art market. All year you can find there artists with their paintings hanging at the walls of kiosks close to the river. 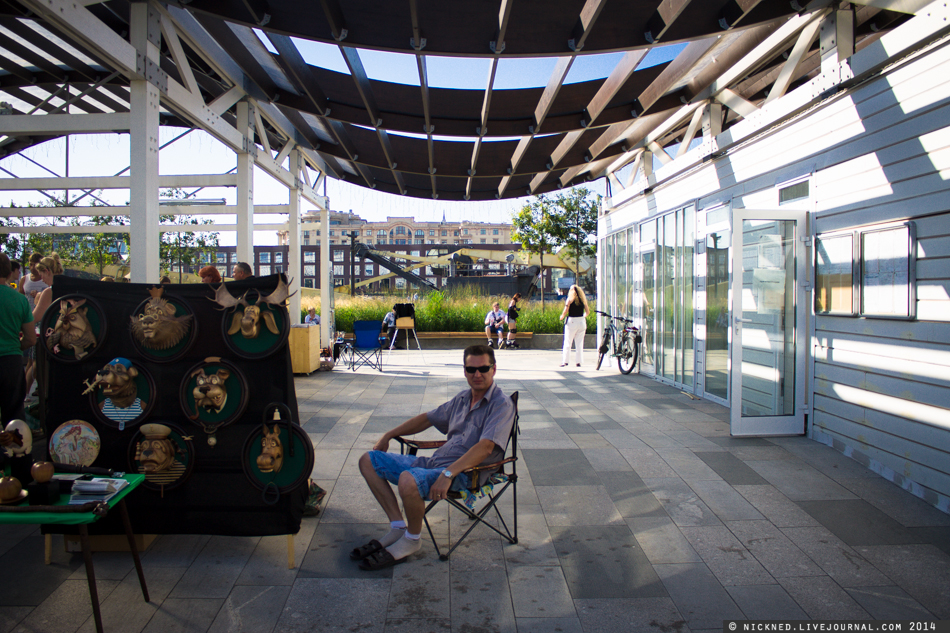 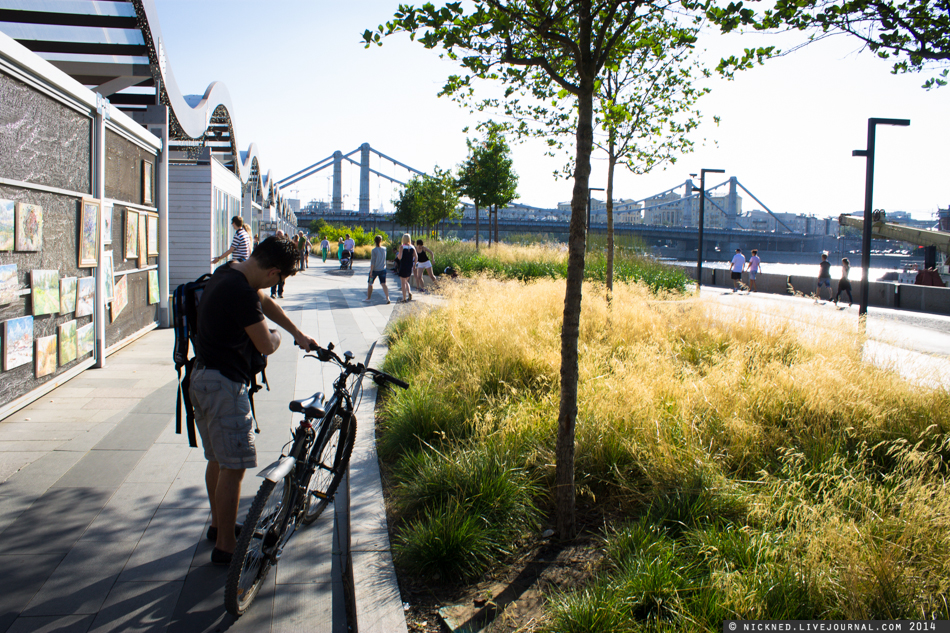 3. A lot of people prefer to walk here during warm season. 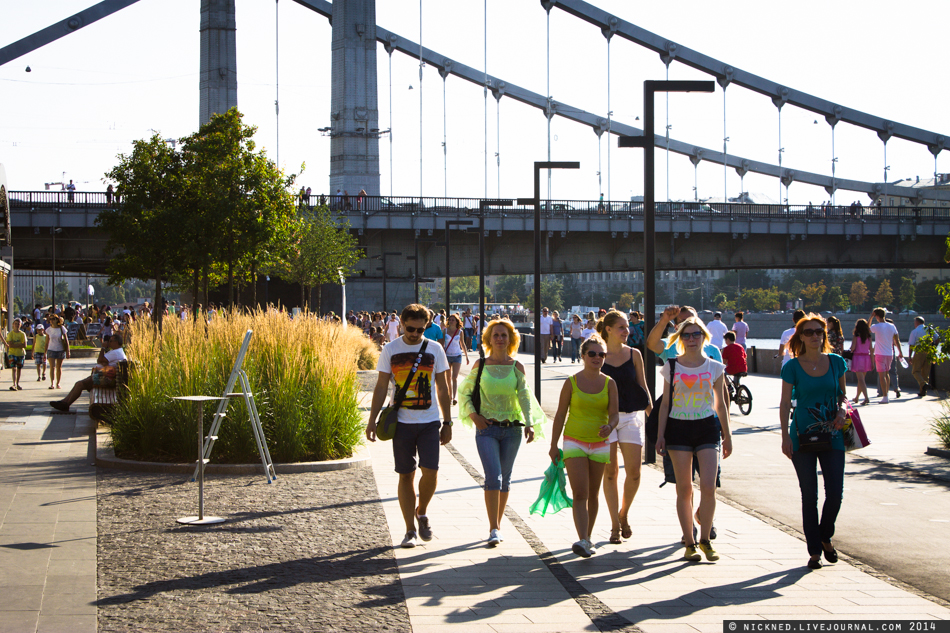 4. The author of the renovated area project is a local architectural bureaux “Wowhouse”. This is not the only project of those guys, and they are cool indeed. Local gods of an urban architecture. 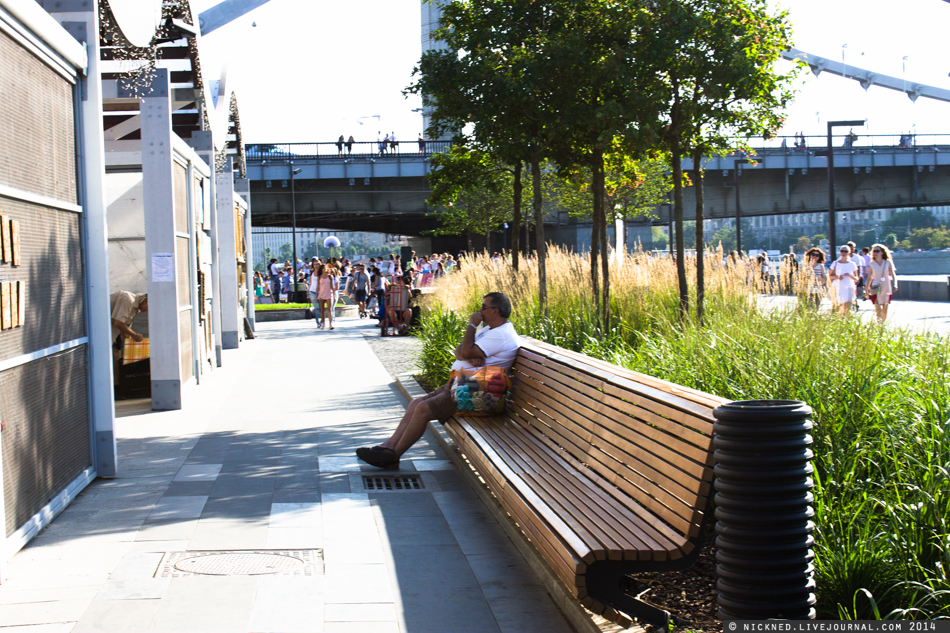 5. Every weekend different people are organizing their festivals and events here at the embankment. The day I’ve made these pictures, it was a festival so-called “The Planet of Humans”. The general goal – to show to everybody the culture of other countries and civilizations to beat the racism in the minds. Great idea! 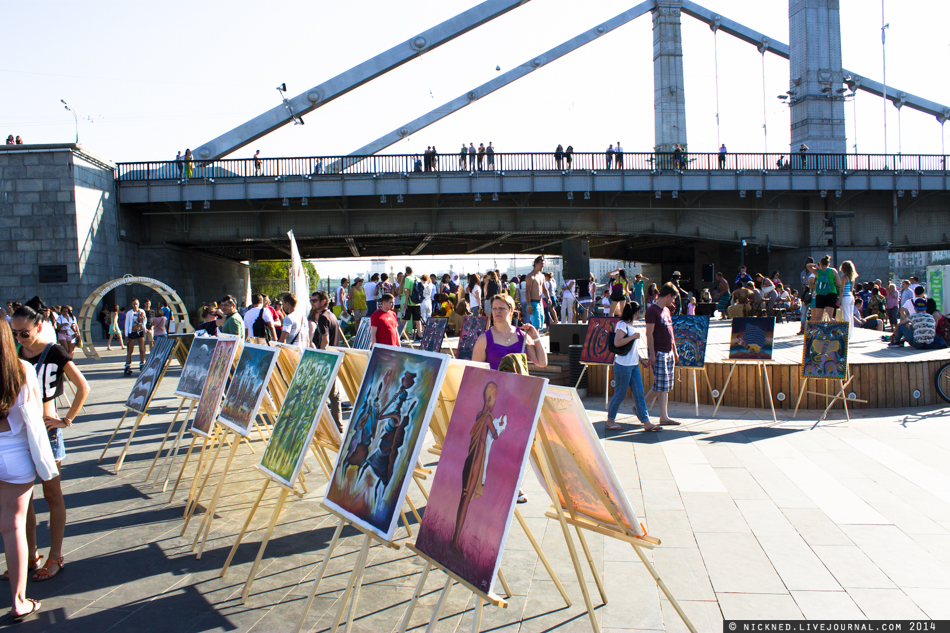 6. The corner with African nations for example. 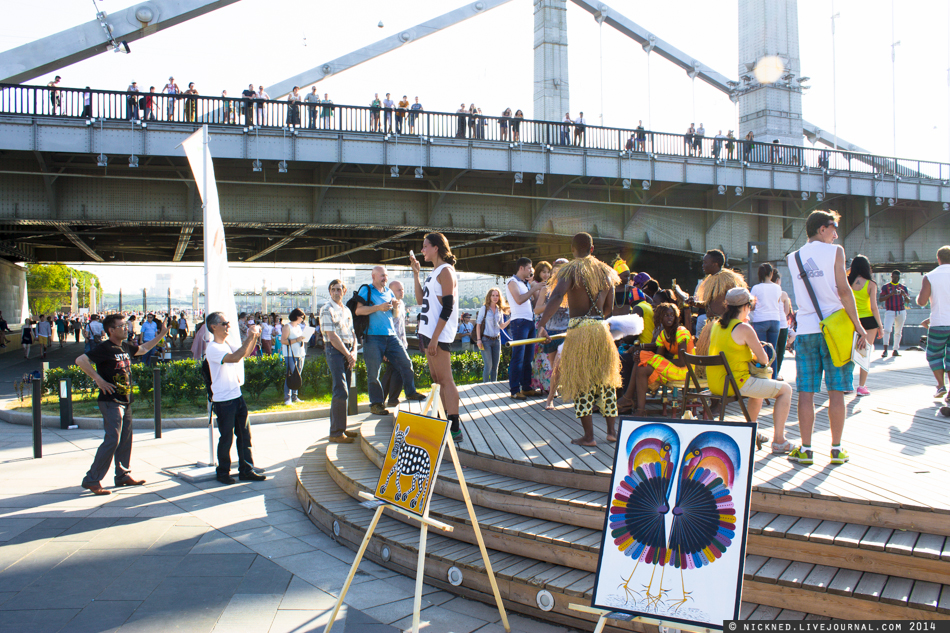 7. The place under the bridge. 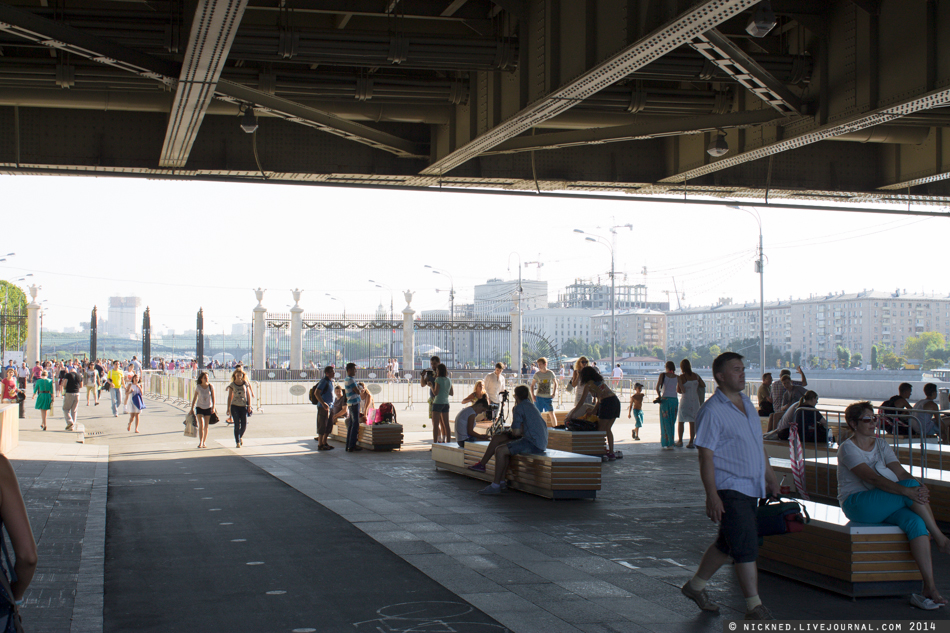 8. There is enough place for everybody at the Crimea Embankment: bicycle roads are going together with pedestrian zones. 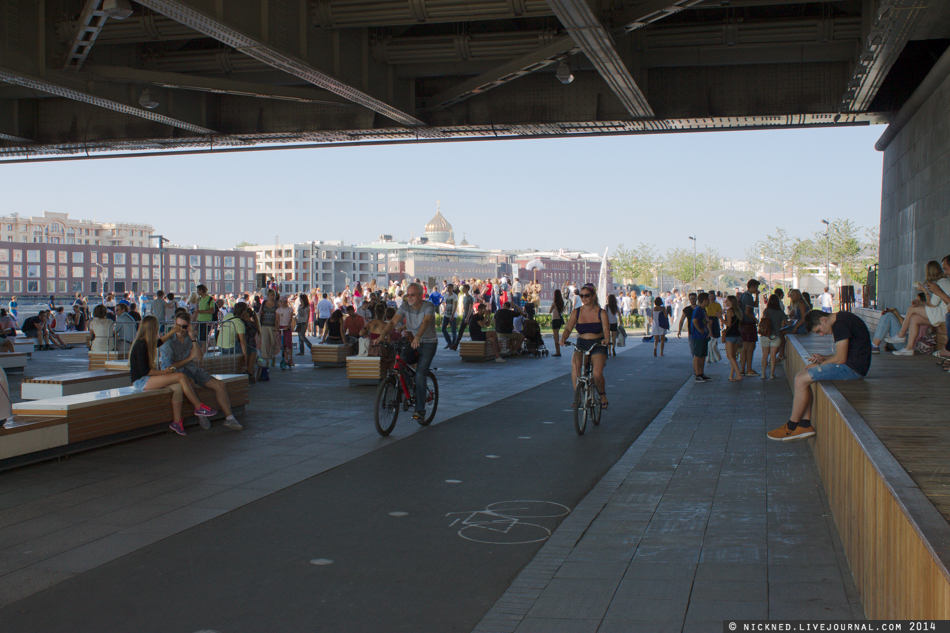 9. Coming back to the fountain! There are tens of people splashing in the water at the same time. 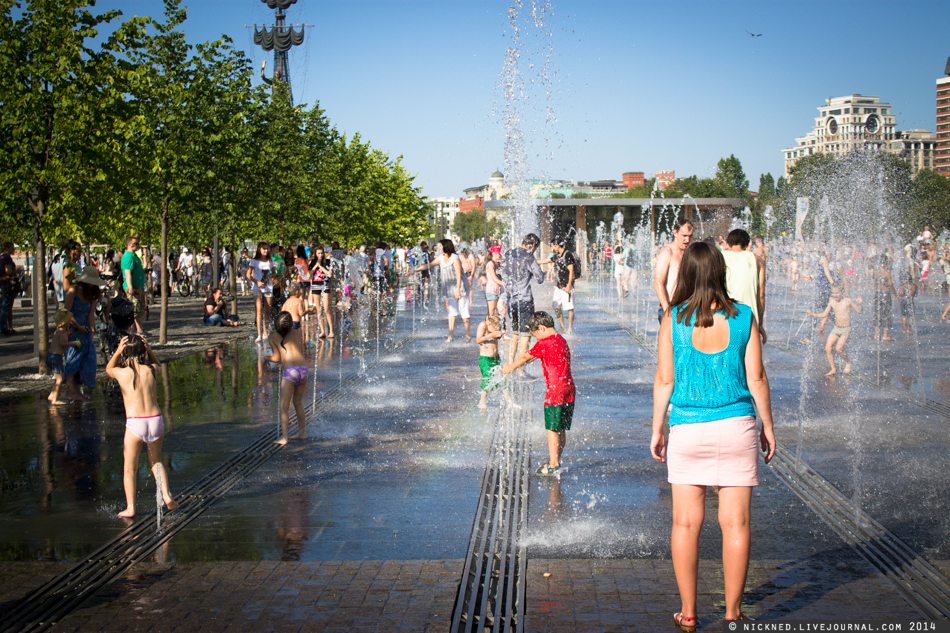 10. Others don’t only watch – but capture it as well. I am shooting pictures on my Canon EOS 1100D which is the lowest-professional mirror camera, but somebody equips much better – check this out! 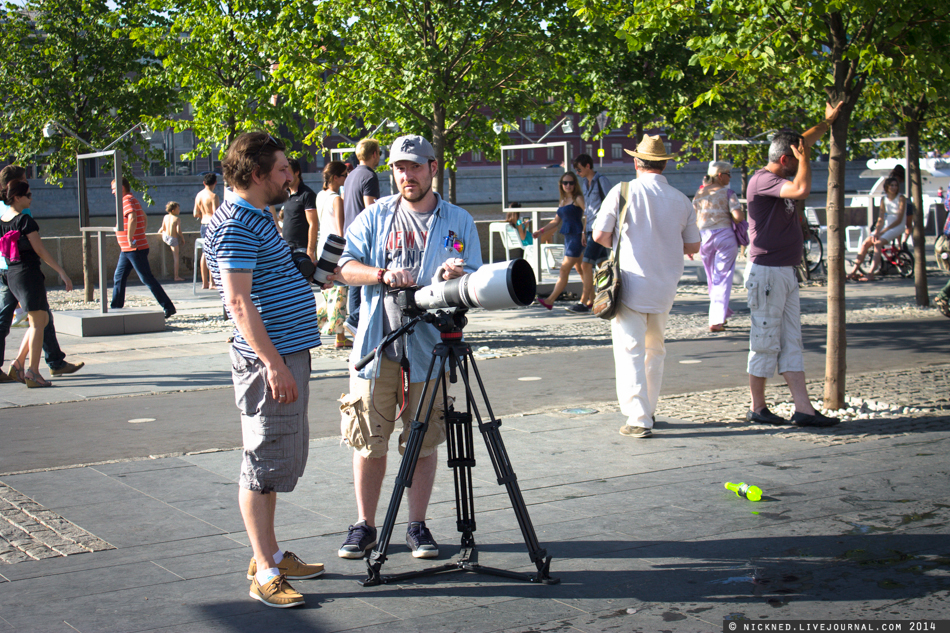 11. Like to watch the people walking down the embankment. Mostly all of them are stylish, friendly and pleasant. 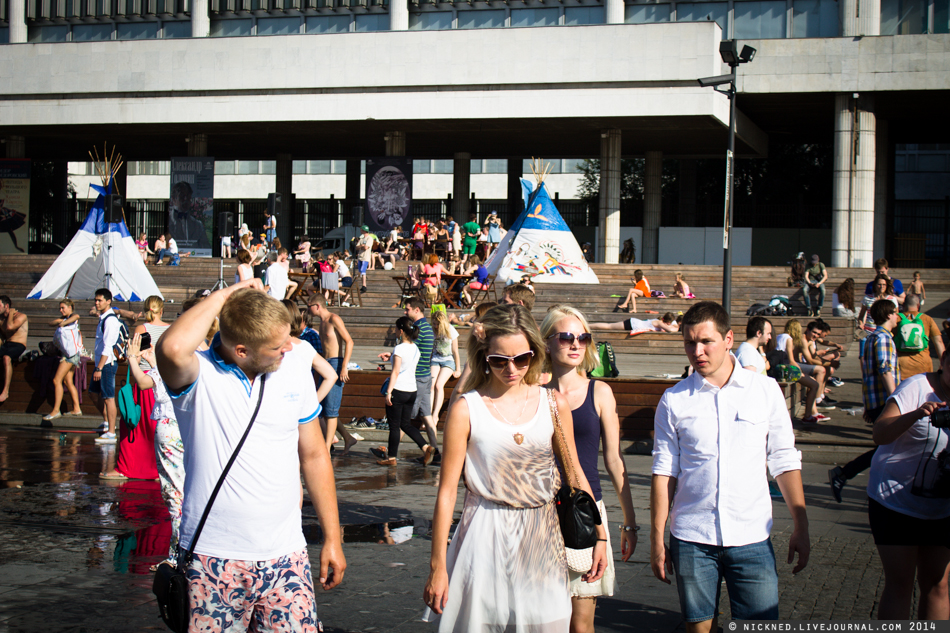 12. That day I was near the fountain together with my friends. This is Tanya from St.Petersburg. She’s hurrying up to come back to me with the water in her palms, she’d like to splash on me 🙂 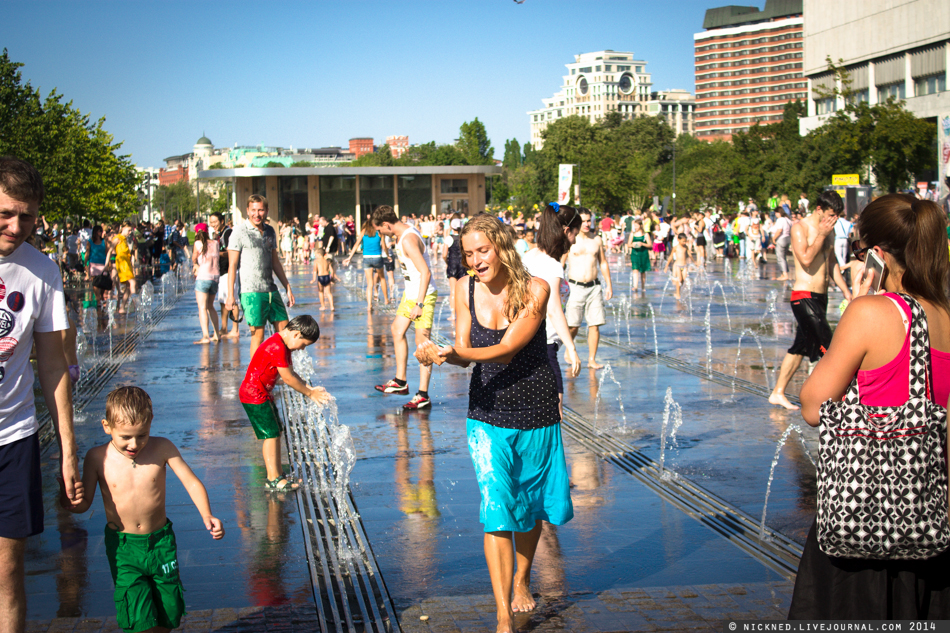 13. No worries, everything is OK. That water was highly appreciated to cool myself at the hot air. 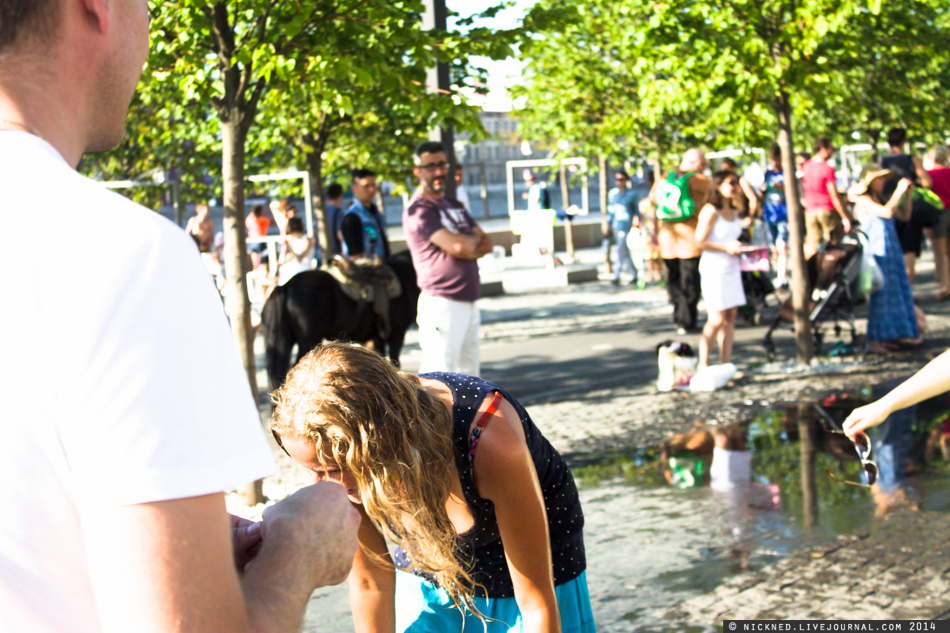 14. The next one is Alex. We studied together at the University. 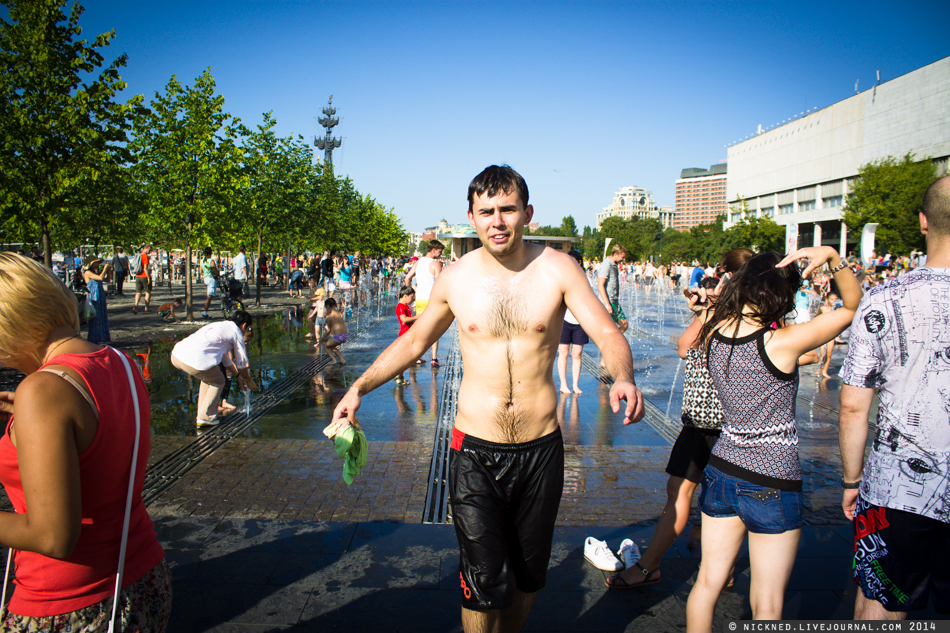 15. Both me and Alex. Looks like somebody will need to wait for a while here topless until the T-shirt will dry. 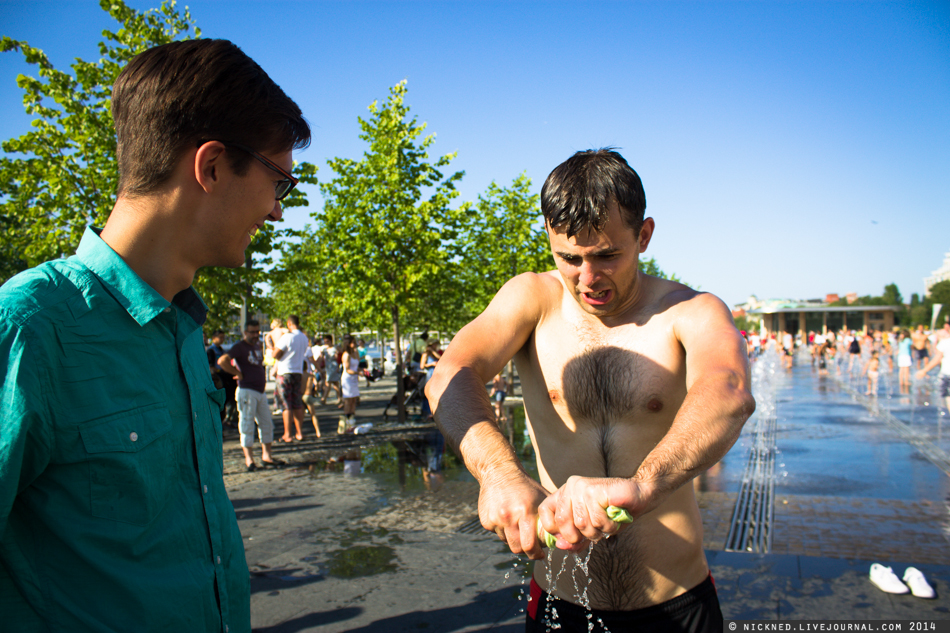 16. Finally, Oleg. He is standing at the right. Amazing dude, he left his job at Deloitte to live the full life – he started surfing, earning money by freelance. 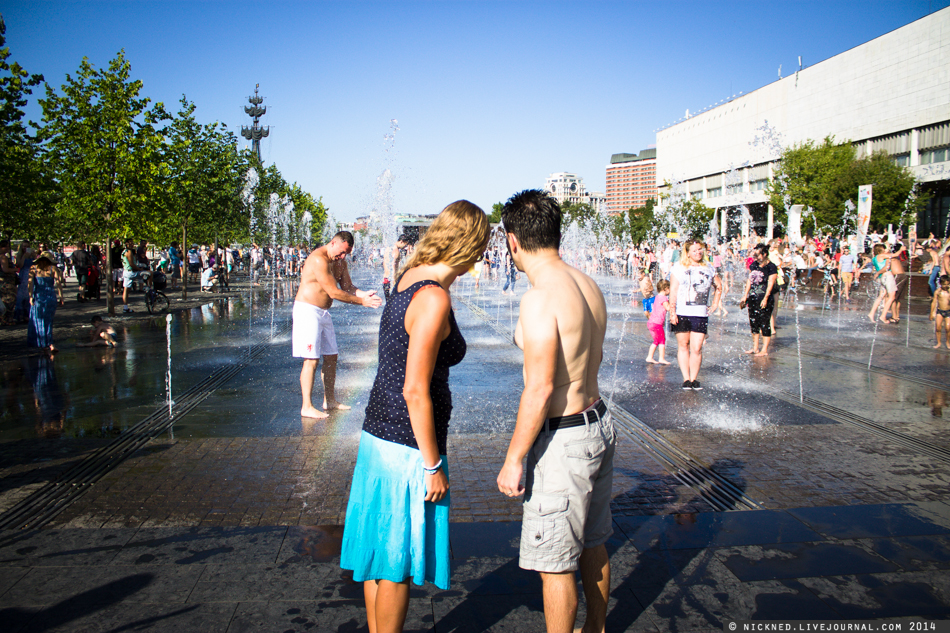 17. Not only pedestrians are running and jumping inside the fountain, but bicyclists as well! Wow! 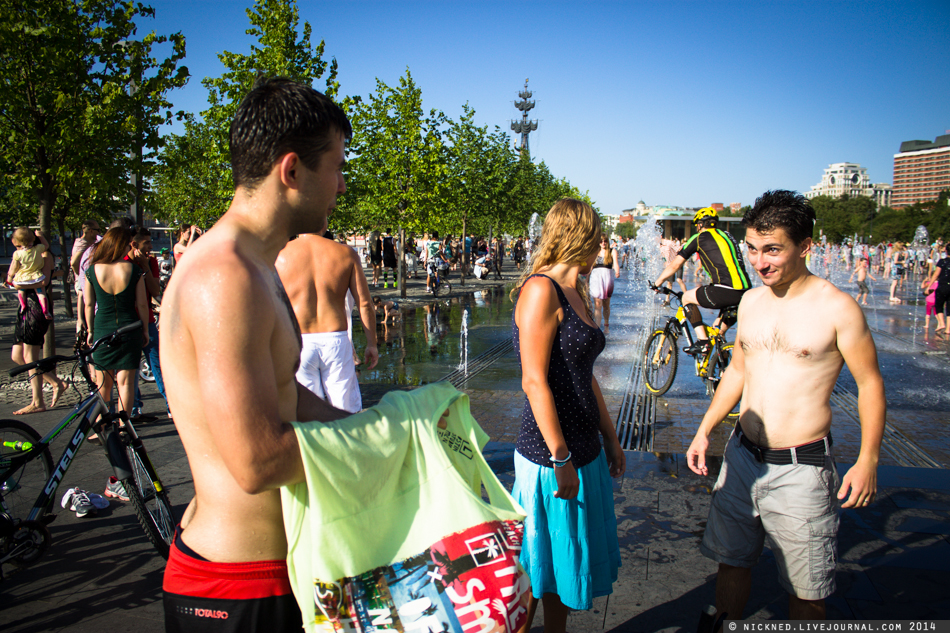 18. Some of them don’t splashing their for fun – only to take some pictures for Instagram and maybe for Facebook. 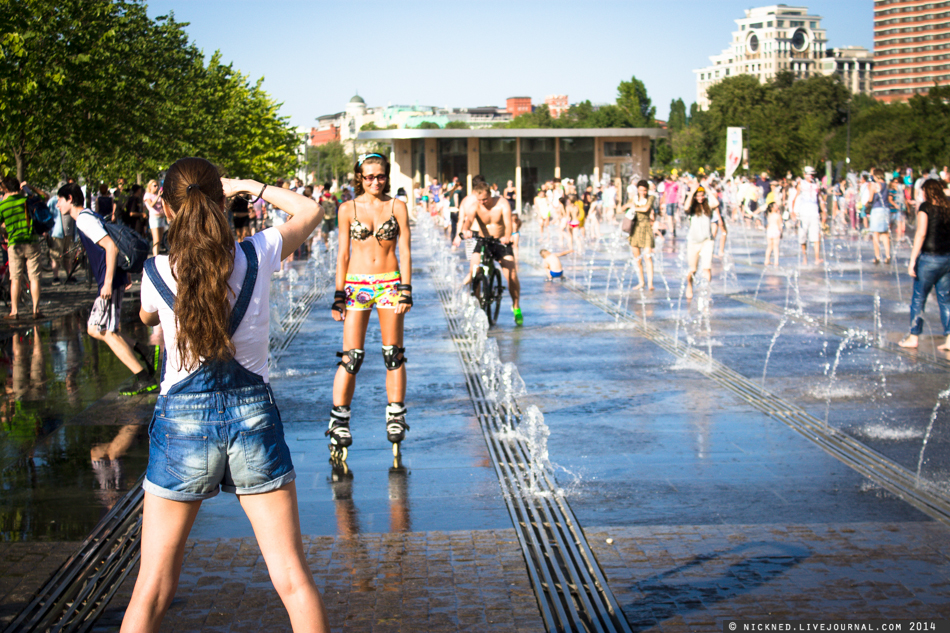 19. It was a great day spent there! Just a bunch of positive impressions! 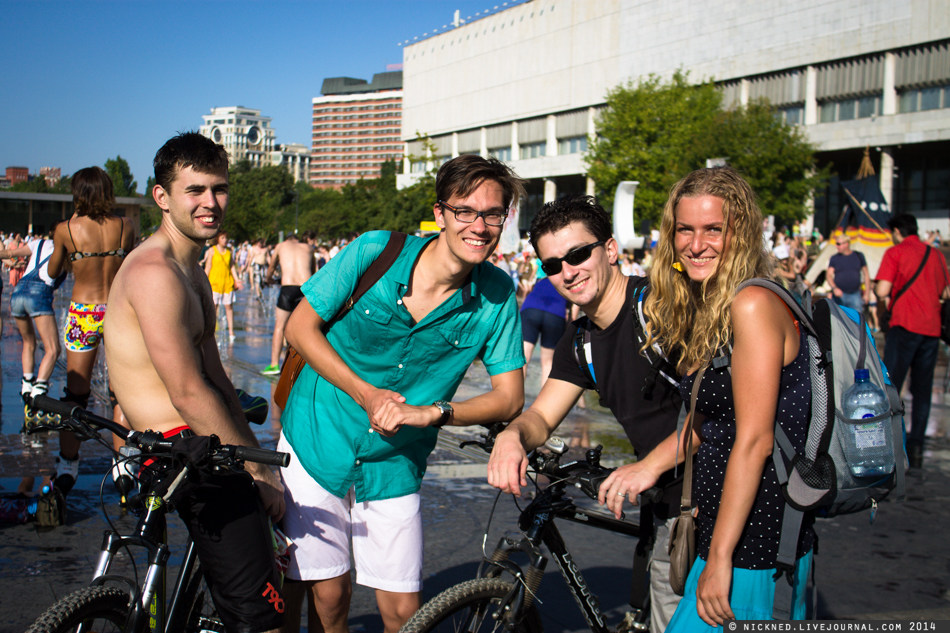 The original article with more pictures was written on August, 8th at my Russian blog:
http://nickned.livejournal.com/252102.html 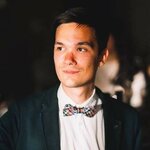